History of this clan is full of velour and courage of the highest order. Kharagsen of Kalwar was one of the most trusted and valiant commanders of Mirja Raja Jai Singh (the founder of Jaipur). Karagsen was martyred in battle in the Southern Province. The name of Bhakat Singh of Kalwar finds very special mentions in the battle of Hinglaj in1728 AD and in many other battles in Aghanistan .One of the descendents of this clan, Man Singh Kilyanot, is immortalized and glorified in “Kurm Vijay” the historical recital of the battle of Mandwa- Mandol fought between then Jaipur and Bharatpur States in1767 AD.

The castle has been carved out of a fort originally belonging to another clan of Rajputs, the Narukas, and won over by the present clan, the Kilyanots, in a fierce battle in the Sixteenth Century. The women folk of the Narukas commited Johar, i.e. they jumped to death in burning pyres rather than be captured alive.

The previous Thakur, Jai Singh, was a reputed shikari turned wild life conservationists, who established and developed the game sanctuaries of Sawai Madhopur and Sariska. In keeping with family traditions the present Thakur, Mandhata Singh, has served in the Indian Army for four decades, rising to the three star rank of Lieutenant General. 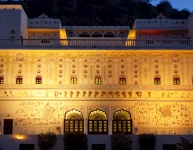 @ copyright 2015 by travelgypsies.in All rights reserved.
Submit Your Enquiry